This script makes a GUI framework that allows the user to add Geyser windows/containers to any of 6 existing spots, 4 of which are tab switched to allow multiple windows/containers in them. The containers can be resized and windows can be moved around on the fly by the user (right click and drag on the resize labels or tabs to move them around). Important note, this script works entirely through the use of Geyser, and will not work with GUI objects from another GUI management system.

The script configures itself and creates all its necessary elements the first time GUIframe.addWindow is called. It is also at that point that it captures values from GUIframe.configs, changes to configs after this point will not be reflected in the behavior of the script. If you want to have your GUI remember how it has been adjusted by the user, it is necessary for your script to call GUIframe.saveSettings when you want to save the current configuration, and then GUIframe.loadSettings when you want to load those settings from the saved file.

Key Functions:
GUIframe.addWindow(window, name [this is the text shown on the tab], target container [top, bottom, topleft, bottomleft, topright, bottomright], hideTabText [optional])
GUIframe.removeWindow(name [as given in GUIframe.addWindow call])
GUIframe.enable(side [left, right, top, bottom])
GUIframe.disable(side, hide [optional, if false only disables resizing of that side])
GUIframe.saveSettings()
GUIframe.loadSettings(redraw screen [this changes the background color from and back to black])
GUIframe.activate(name)
GUIframe.styleTab(name, styleString)

Key Other Info:
GUIframe.configs - this is a table which a dependent script can write to in order to change how the GUI created by this script looks when initially setup. All options seen in GUIframe.defaults can be set in GUIframe.configs.

The attached .png files are a set of the arrow images I used with the resize labels, with varying levels of transparency, with the 20t version being the most transparent, 50t being the least transparent, and blue_arrows being fully opaque (intended for when the label is moused over).

Code: [show] | [select all] lua
Edit: Updated the script to fix a bug that popped up for someone using this on a fresh profile (because I clearly didn't do a thorough enough job checking for such things).

Edit2: Decided to do a significant rewrite of the script to make it remain in the background until called upon.

Edit5: Change to ensure frame sides remain the same when calling GUIframe.loadSettings regardless of the size of the current main window.

I forgot, here is a brief demo video of this script in action.

Someone asked on Discord that I share the setup I used for the demo video, so here it is. I had this in an alias and was using it while doing development and testing, so it is pretty basic. But I think it shows how little needs to be done to make use of this script.
Code: [show] | [select all] lua
Top

Vadi suggested a nice demo for people may be to combine Jor'Mox excellent work with Akaya's Geyser Template from this thread:
https://forums.mudlet.org/viewtopic.php?f=6&t=4098

Which is a simple beginning point for building your own UI. It's been around for a long time and even as someone relatively confident with Geyser, I've used this several times to build from over the years.

I had a look to see if the two could be combined, and it can be. I doubt I would ever use the result - using GUIframe is so easy, most of the 'laying out' part is bypassed because of the drag-and-drop nature of the script. But, it may be useful to some people wondering how to use GUIframe. Another 'demo' if you will.

The GUIframe + Geyser implementation is in place on StickMUD. Find it on the default list of games in Mudlet. Great script work authors and we appreciate the enhancements you have made!
Top

I was trying this out today, when I right click a tab and move it to another box, the label text on the tab dissapears, and the tab is just blank.

Edit1: I just got another idea inspired by kde desktop toolbox.

you could have an additional GUI label, that shows a small locked or unlocked padlock, that can be placed anywhere on the screen.

left clicking this label will lock or unlock the gui, displaying or hiding the drag-able resize labels.

while in the unlocked state there could also be a save button/label visible next to the lock button.
Top

Is it possible to modify the label of a container tab?

In my Case I would like to modify the Mapper label that says "Map" to instead say the area name of the Area I am currently in.

I already parse this data, for the mapper so it would be cool if I could update the tab handle to the name of the "Area - Room"

Thanks for the bug fix and for telling me how to do this:

Edit, I created a function:

Then in my Script that processes the Room GMCP data I did this:

Now as I walk around the mud the Tab/Label at the top of my Mapper displays the zone and room name such as : Aylor - Phoenix Square
Last edited by jieiku on Thu Mar 07, 2019 7:25 pm, edited 2 times in total.
Top

Here are some Ideas that I have for extended Drag and Drop GUI Framework:

* Floating miniconsoles, that snap relative to another regions corner.
This is different than the tabs that snap into a container, because it actually floats above other elements.
For example my minimap, that I have manually snapped to the top right corner of the main output window.
These floating windows would snap in this fashion when you drag a Tab near to the corner of another container.
When a container is a floating window/miniconsole it should have some resize handles of its own.

* Lock/Unlock button, another label like your draggable blue arrows.
when this button is clicked it affectively locks the gui, by hiding all the draggable arrows.

* Save button, this button could be positioned next to the Lock/Unlock button.
it would also only be visible when in the unlocked state.
another idea would be to have it autosave when you put the UI into locked state.
or maybe an option to configure it to save every time it is locked.

* Favorite Tab selection, In a group of tabs, be able to mark a tab as favorite,
so that on guiLoad it is the displayed/activated tab.
If no favorite is set then show the left most tab out of a group of tabs.
I currently do this: GUIframe.activate("Chat"), without this the "Tell" tab would end up being active.
Maybe just having the left most tab be the default would make things natural enough.
Either that or have it remember which tab was last active between sessions.
I realize I solved my problem simple enough with GUIframe.activate("Chat"), but I
am thinking making things more intuitive/natural is good because not everyone is a Pro at configuring.

* Add a configuration option to display tabs with or without the rounded edges.
I prefer the square look myself, I realize the outside edges might not actually be clickable, but
I think that is a non issue for most people, they can figure out that they need to click toward middle.
What is cool about my Lock/Unlock idea is you can add all sorts of buttons for configuring Drag-n-Drop without
it cluttering the screen, because then once you lock your UI they would all be hidden.
So you could for example have Another label that is clickable that lets you toggle between rounded or square tabs.
this button label would be hidden while the UI is in the locked state, could be placed near the lock and save buttons.

* Dynamically allocate new tab regions, instead of having 6 predefined regions.
Out of all my ideas, I think this one would be the most complex, but it also offers the most creative freedom.
Would be based on the position of the mouse while dragging a tab.
If you drag the tab near to or between other tabs, it would dock into that container like it normally does.
However If you drag the tab to the Left Center edge of a Container, it would then split that container vertically, and
that tab would then be docked on the left and the old container on the right.
Similarly if you drag a tab to the bottom edge of an existing container, it would be split horizontally, and
that tab would be docked to the bottom and the old container on the top.

Photoshopped image illustrating some of my ideas (please excuse the poor graphics): 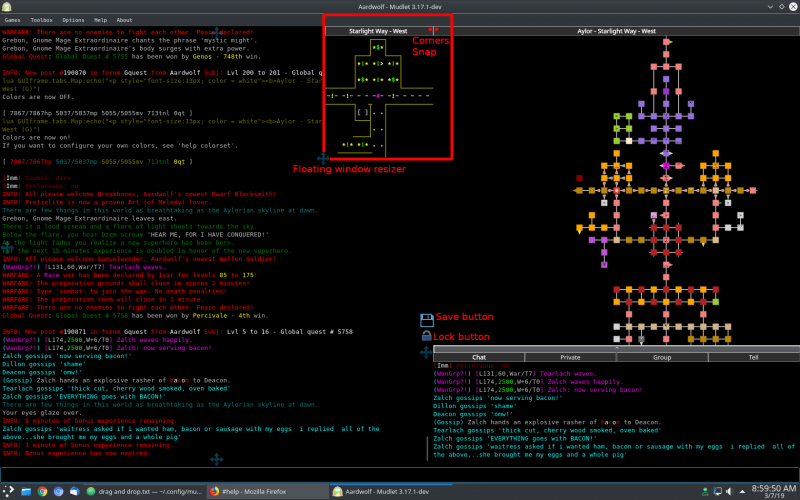