As we are rapidly nearing feature freeze in the run up to Mudlet 1.0, I'd like to hear if there are any important requests that should go into 1.0.

After 1.0 I'll add a nice graphical mapper first plus a series of trigger engine upgrades that will increase the performance dramatically for users with huge amounts of triggers.

This is your last chance to get your particular request into 1.0.
Top

My requests are mostly just a couple of the things we've discussed in other recent posts.

2. A method by which scripts common to profiles may be kept separate to other scripts which must be unique to a profile, so that we do not need to maintain multiple instances of the same scripts. For example, I may have a set (package?) of triggers, aliases, script objects etc that is related to curing, and is the same on every character I play, while the scripts associated with that class abilities will be unique, due to each character having different abilities.

3. I did mention this way back, and I don't know if a decision was made or not, so I am bringing it up again. The screenshot at the bottom is of CMUD. zMud also had this feature (since early days also). In it, I have used the "info inventory" command to bring up a list of items in my inventory. I have right-clicked the unique ID of the tower shield I am wielding, and a menu (which I defined in script) shows. If I select the visible 'Weapon Probe' item from the menu, the command "weaponprobe shield115307" will be sent to the mud.

The script necessary to add this line to my right-click menu is simple:

Also available is %selline, and %selected. %selline refers to the entire line, while %selected refers to current selection.


4. This may be possible at the moment; in honesty I have not yet gotten around to looking into it. I would like to be able to place clickable links on my screen. For example, I could make a trigger that matches likely website links, and makes them actual links which when clicked on will open the page in my default browser. Also, I could write triggers that parse the output of the "wares" command in a shop, substituting each line with a hyperlink, that when clicked will buy that item. Parse the output of "ab <skillname>" command so that clicking on the name of any ability in the list will send "ab <skillname> <abilityname>".

Naturally, if you did agree to implement MXP, that sort of thing would be part of the mxp implementation. But if you don't implement mxp, that feature is still very useful. 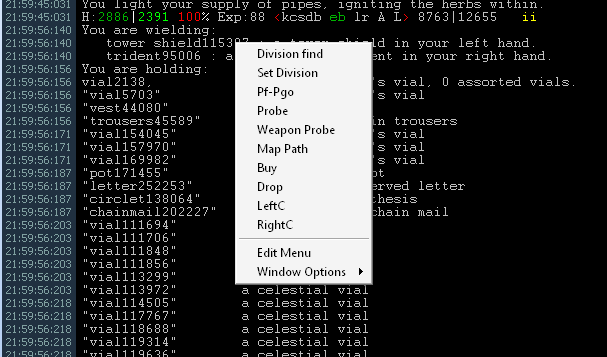 Patch is in the email.

+1 on MXP, but I'd rather have it be MXP and not a Mudlet-specific client-side only implementation. Heiko already knows my stance on that

I wouldn't mind a test area in triggers to test if they match an example string.
Top

Everest wrote:I wouldn't mind a test area in triggers to test if they match an example string.

I mentioned it a while ago, and I noticed a fake button for it in a screenshot... but a Notes feature would be helpful. The best MUD client the Mac has ever had, that no longer works on newer systems, was Rapscallion. Rapscallion had an option to write notes in the client, which were connected to each MUD that you played. I always used it for in game maps, special rules and commands, and to work out my prompt string (I always have quite a long one... I like all the info at my fingertips

). I remember reading that it wouldn't be too hard to implement...
Top

Since Mudlet's built in timestamps are about as accurate as you can get, I was wondering if it was possible to add a millisecond option to them. Would be useful to be able to check those without having to write a timestamp display into the system.

OK, the last 2 requests are quick to implement and they'll be in beta-10pre8 (next prerelease)
caled: You can make user menus, even checkable ones -> easy buttons, but you can't yet script them, that's correct. I'll make them scriptable.
The rest of your requests needs a longer reply and further discussion. I'll reply to this later.
Everest: Yes, this feature has been almost forgotten about. In our early version we've already had such an integrated test area. We need further discussion on how to make it a good one.
vadi: yes, i agree that clear text alias are a good thing to have by default. I'll see that I can get this feature in asap, but it does require some background work. I'll need to finish color triggers first now then I'll go at it.
Top

Heiko wrote:caled: You can make user menus, even checkable ones -> easy buttons, but you can't yet script them, that's correct. I'll make them scriptable.

Are you sure you're understanding my suggestion? So far as I understand it, menus as I am suggesting have nothing to do with buttons at all. Look at the screen shot I gave, if you haven't already. In it, I am right-clicking random ordinary text in the main window. Not a button in sight.
Top
Post Reply
47 posts