Hey guys, couple of questions. When I try to change the main font on my imac it crashes the client. Works fine though on my macbook pro though. From what I've read it's a problem with how OS X is handling the fonts. Any suggestions on how to get past it?

Also the mini console font that comes up is pretty bad on my particular machine. It's so bad I'm considering not using the feature even though I've written some chat triggers and what not. Is there anyway to change the font or have it match the main font?
Top

Could you post a screenshot of the font as it is before change, and the error report your Mac makes?
Top

Hi Vadi, I tried to get an error report but what's happening is the application is freezing up and then locks until I force quit. When I force quit there's no error report of late, but I recall it gave me one or two in the past. Not sure how to make it do it again. Here's a screenshot of the two different fonts, although this is softened to give the appearance of anti-aliasing of the one on the right. 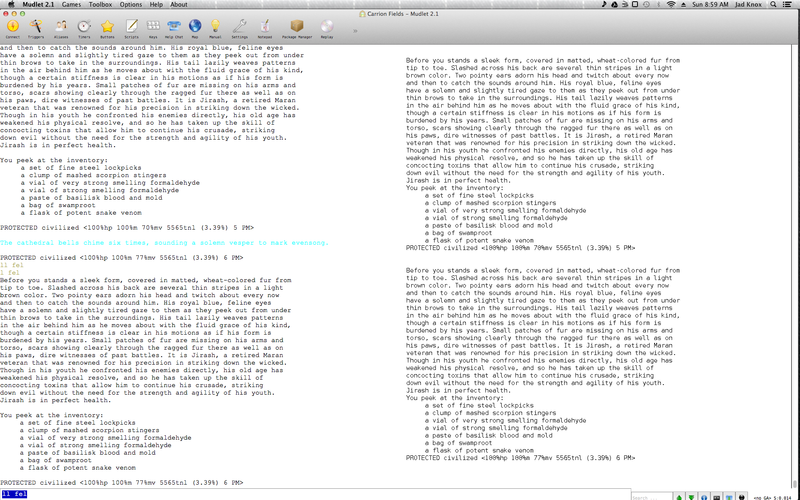 It looks much more jagged on my screen, while the other font is sharp but anti-aliased and actually looks better than the screenshot would indicate. I've also included a screenshot of the font settings. 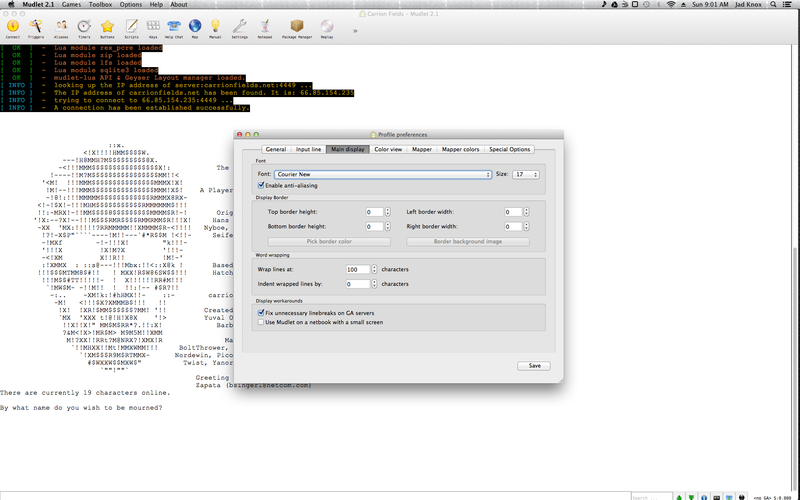 It's clicking on the font bar in the screenshot that crashes the client. I opened font book yesterday and resolved the listed issues, rebooted in safe mode, and then rebooted again, but it didn't solve the problem. Changing fonts works fine on my macbook pro, but again the console font seems jagged.
Top

The font issues and other OSX related bugs stem from some OSX changes. Older OSX versions are not affected. Until this has been fixed you can try a few things to alleviate the problem:
1. experiment with different mini console font sizes until the font looks acceptable (the problem is that the underlying font engine tries to find replacement fonts for inaccessble fonts or undefined font sizes and this replacement may look bad)
2. Try to install Mudlet's default font on your computer
3. You can change the main console font in the profile xml file if the font dialog crashes.
Top

Yeah, people find this post on Google so I thought I'd update it