I am playing a non-standard character mode MUD (british-legends) which has a entry prompt * and echos characters as they are typed retyping the entry line if new output occurs. This doesn't work well with the standard setup of mudlet which echos entered commands twice and doesn't align the entry of the command to the prompt but rather displays it two lines below. Any ideas if the visual nuisance of this can be improved?

Also, can mudlet open ssh connections? I have test mud on ssh and I don't really want to open up another firewall rule.

by Vadi
Perhaps with some triggers? You can format and rewrite text with Mudlet quite extensively.

TLS support is coming with the next update.

by quentinnuk
Ive improved it a bit by turning off the "show text you sent" option in the settings, but can't seem to get it to go into character mode instead of line mode. Still, no biggy.

by SlySven
Switching off the "Show text you sent" option might be some help: 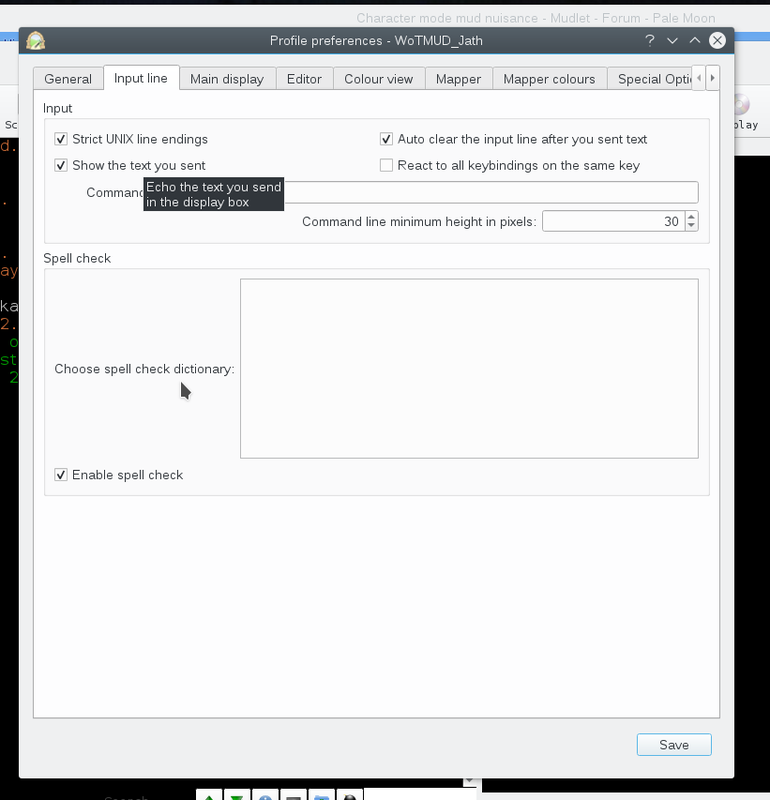 I didn't see your last reply until after I first posted this but will leave it up for anyone else wondering about the option being mentioned.

As for Character-by-character mode - if I can call it that - Mudlet does not handle that very well - as it is geared towards a buffered line-by-line mode of operation, though as we do not negotiate the Telnet ECHO option (IIRC) the MUD Server should realised that already...

It might be possible to write a trigger that spots if the preceding line is identical except for being exactly one character shorter than the current line and to replace the previous line with the newer longer line - that isn't a perfect solution but might help if you are getting the sort of on-screen display I am imagining!

by quentinnuk
british-legends doesn't negotiate line vs char mode, it insists on char mode as it was originally written on a Dec-10 back in 1978 and then moved to Vax and is now on Windows so is very old character terminal (originally dialup serial) orientated. Telnet is very new tech in the BL world!

by SlySven
That is old! Hell, it seems to have almost come into existence just after Bartle and Trubshaw's original MUD which dates to that same year.

{Name dropping: I once worked - for a few weeks - in the same office in Albrighton, Staffordshire back in the early 90's as Mr. Trubshaw - he was known as a database Guru even then, mind you that was when I got introduced to 4-player network DOOM during the lunch-breaks - and I wasn't interested in text games back then...!}

by SlySven
Blimey - that Wikipedia article explains it:

"...MUD1 ran under the name British Legends until late 1999 and was retired along with other software during CompuServe's Y2K cleanup efforts..."

by quentinnuk
Yea, BL is MUD1 and it is still available on the british-legends dot com domain.
All times are UTC
Page 1 of 1
Powered by phpBB® Forum Software © phpBB Limited
https://www.phpbb.com/