@Neisklar I've just included two Pull Requests 282 amd 283 for the Development branch and the Preview branches on Gihhub that mean that they will both build on the Travis Continuous Integration system for Linux (Ubuntu Precise Pangolin 12.04 LTS) and MacOs (Maverick 10.9) Os platforms using either of the Clang or GCC compilers they provide and either of the native Qt qmake build system (based on the ./src/src.pro project file) or a CMake one (based on various CMakeList.txt files and a few others around the source code directories). The Linux build there is using Qt 5.0.2 libraries and the MacOS ones Qt 5.5.0 IIRC. {There is a known failure at present with Linux-Clang using Cmake with an internal cockup in the Qt 5.0.2 headers - I think Clang is more picky and doesn´t link something about the internal usage of those old Qt 5 libraries}.

What this means is that if you clone the git repository locally you can take a look at what gets brewed to be included in Mudlet by studying the ./CU/travis.osx.before_install.sh and ./CU/travis.osx.install.sh scripts and what is done to use qmake or cmake (in the right directory!!!) in .travis.yml to setup the environment and build the application...

Edit: The above PRs have been merged into the relevant GitHub repositories so are now in the code-base...
Top

I'll give it a try
Top

SlySven wrote:Is the tool-bar still showing (there is some logic to ensure that at least one of them is showing at start-up at the start of the Mudlet application itself) - then you can get to the preference dialogue to re-enable the menu-bar...?

Yes sure, the tool-bar is always displayed, so even though I don't need or want to see the menu-bar, I will have to activate it for every new profile (every character I play), and keep it activated too, because otherwise the Alt+R shortcut won't work. Here is one for allowing the shortcut to work without showing the menu-bar.
Top 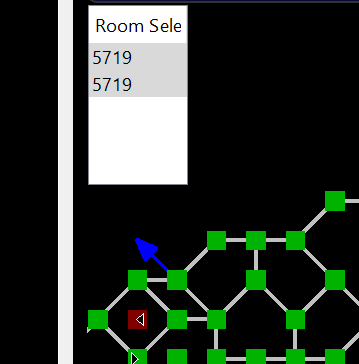 If I double click on a room to begin speedwalking, a dropdown menu for room selection appears, showing two options for the same room, and after speedwalking to that room the dropdown menu remains on screen. The screenshot is after a speedwalk has completed.

Also, if I use either the scrollwheel of the mouse or setMapZoom(14) to set a particular zoom for the inline/embedded mapper window, upon movement it resets to the default zoom level.
Top

That looks like some outstanding internal map corruption caused back when the code to move a room from one area to another forgot to remove the record of the room being in the first area, the current use of a QList<int> structure to hold the list of rooms for an area is non-optimum as it permits duplicates which is not a sensible data format for this role - I did have some major revisions that would fix this as a side effect but I have not yet got around to plumbing it in.

Looking through the current code-base I see that there is no obvious easy way to clean this up for the user. It really needs extra auditing or consistency code to be put in - or the above mentioned revision... *sigh*

Could you post a copy of your map somewhere so I may poke around in it to see what the quickest way to fix it might be?


I do not recall whether setMapZoom is operative - but from what you are saying it does seem to be.
Top

I noticed an issue recently in that my auto-connected profile is shown twice. I only connect to this one profile. It did not do so earlier. Nowadays, I get to see two tabs with the same title name and contents. When I try closing one of them, both will be closed. When I try reconnect again, again two tabs will be created. Did I influence some weird option without noticing? Would not expect this to be any desired behavior though.
Top

That doesn't look too good - have you changed versions (compiled one from the github repo) repository? I don't *think* I let a new bug in with any recent changes I've made and posted out. but I do wonder if someone else's recent change clobbered something!

"auto-connected" profile - you have checked the checkbox that gives the option to start the profile when Mudlet starts - and you do not try and start it yourself as well do you?

SlySven wrote:
Could you post a copy of your map somewhere so I may poke around in it to see what the quickest way to fix it might be?


I do not recall whether setMapZoom is operative - but from what you are saying it does seem to be.

Map is attached.
It was a freshly installed mudlet, and a freshly downloaded map from the aetolian game server.

Blimey - that map has EVERY single room duplicated in each Area's list of rooms for that area. I think I'd better wield in some more code to fully check the consistency of the TRoom::area and TArea::rooms after all - now where did I leave that prototype...

It seems like there is a missing dependencies with the linux 64 bit .run file.
I was able to fix the missing libicuo18n one, but I haven't been able to fix the QT/XCB one:

jimbus@WatchWehr:~/mudlet-3.0.0-delta/bin$ ./run-mudlet.sh
This application failed to start because it could not find or load the Qt platform plugin "xcb".

Reinstalling the application may fix this problem.
Aborted (core dumped)