I'd curious about the goal for the upcoming Unicode support is. I've been wondering if a MUD could be designed to send extended Unicode characters for mapping symbols, and if so would Mudlet be able to display them. Thanks.
Top

If it had an "on-screen" map that it drew each time you moved then I think that would be possible. I do have medium term intentions to also replace the current ability to have a single ASCII character as a "room character/letter" that is drawn on the square (or eventually round - there is a current bug that, even when the rooms are set to be round, those with a letter are drawn as squares) room symbol on the 2D map with a single grapheme from either a specific font or any available font in the system.

Of course there are one or two details for that that make things more complicated but something like the free symbola has a lot of glyphs that would be useful for map makers. Or if someone is really keen they could make their own - e.g. using FontForge like wot I dun back when I was hacking around with the console based TinTin++ client (my version with an enhanced mapper using this set of glyphs never got published so don't go looking 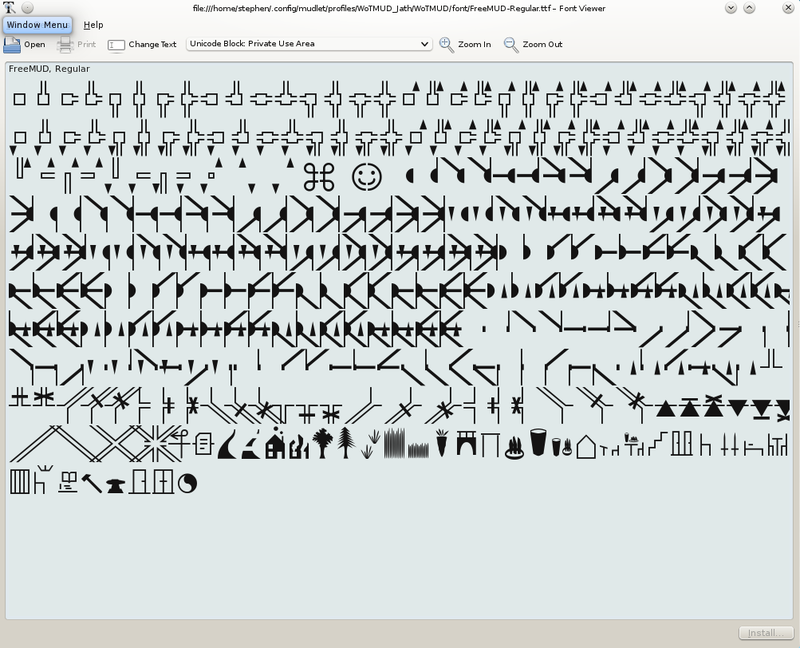 It's already possible to use Unicode client-side, see http://wiki.mudlet.org/w/Manual:UI_Functions#cecho for examples. Sending it from the server - the UTF-8 encoding in 3.2 might allow it, not sure - need a MUD to try it with!
Top
Post Reply
3 posts • Page 1 of 1