I don't know why but I think the chat window randomly goes to the opposite side. Anyone know what to do to make it stick where I said it should be? Bottom right in my case.
Top

Randomly is tough to troubleshoot. Is it possible you've set the configuration option twice somehow, and so it gets changed when you save/click on and off of the script it's configured in one place?

IE if you have it set in two scripts, the one which appears on the bottom will take effect on startup. Then if you click on and off of the script which has the different setting, it may insert that value.

It's difficult to say without more information. You might also consider removing the fixchat alias, as that was in place to fix a GUI issue which is no longer in mudlet, iirc.
Top

The whole config thing? As far as the location, I only have it here: demonnic.chat.config.location.

I removed fixchat, it still sometimes goes back :< Weird. I'll check what else I can do.

Are there any errors in the error console (scripts, then click errors on the left, it'll open an area bottom-right)?

Something somewhere has to be changing a value and then calling for a redraw, just need to figure out what it is =)

Let's start with errors, and if that doesn't help we'll turn on the debugger =)
Top

Yeah, I checked the errors, it didn't show any D:

I did remove fixchat, but my issue went away when I restarted the profile. I'm not sure what happened, but yeah hehe. It's okay now.

thanks! I really love how easy it is to set the chat tabs. Other chat tabs seem to be more complicated to set up.
Top

Not sure if this is where to post this, but on Lusternia, I was having...

Well, it started out with the says not being sent to the chat window. Apparently the "<whomever> says" line was changed to put a comma after the says.
No problem, I thought, so I put the comma in.

Next issue was that now, anything that came in with (.*) says, would get taken, so messages from guilds or orgs would be printed twice.
The problem was that the pattern for the Says had the wrong brackets. So I changed the ^(^\() part to ^[^\(] and it was fixed. It needed to be a class rather than a substring apparently.

Just thought that I would pass that along. It still truncates my messages though.

Truncates how? Can you provide a screen show showing what you mean?

I'd like to try and fix it if possible. I use it in Lusternia myself.

I'm also working on automating the chat capture using gmcp. Only hiccup has been gagging the line in the main window when the option is set... since it's coming in off of gmcp and not the text the two don't happen simultaneously. Haven't actually looked at the timing on that, but if the text comes in before the gmcp then it will require a bit more coding for me to gag it out. I'll figure it out though.

ETA: Though when doing says, tells, and emotes without GMCP I have been changing the color in config colour and using color triggers to capture them. It's the only truly reliable way I've found to do it, due to the complexity of the says and emotes in the game. They'll always get coloured right by the game though.
Top

I just took one this morning. 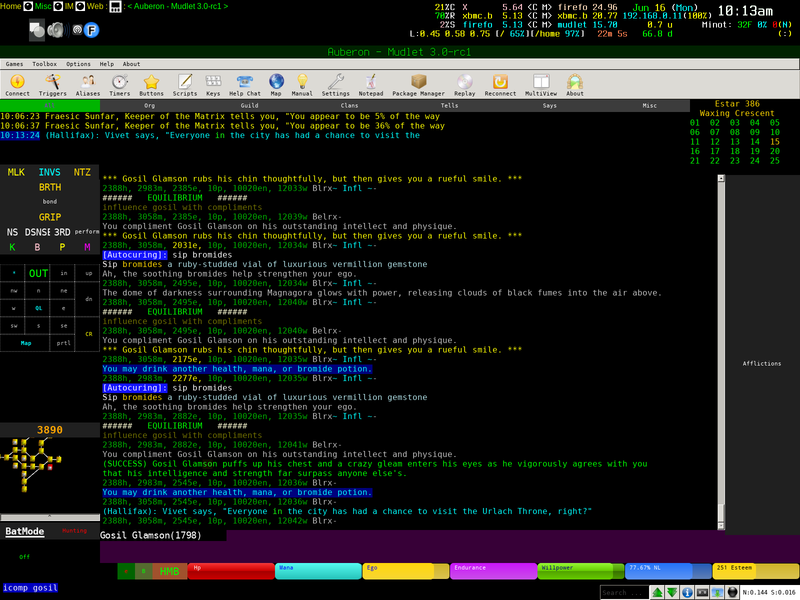 That is definitely a bit odd. Would you mind exporting the chat triggers and tabbed chat scripts as you have them in your profile and attaching them? Or you can email it, I'm the same name at gmail dot com.
Top

here they are. I've included the Yatco scripts, and your Demonnic-v22 as well. Not sure if they interact or not. I don't have any other chat scripts that I'm using.

Users browsing this forum: No registered users and 5 guests