Alright, here's the new package with the proper changes to HOPEFULLY fix the image issues, as well as the triggers and aliases used.

Changes to Images:
Code: [show] | [select all] lua
Changes to how it's loaded:

-Added a sysLoadEvent to call 'loadGUI()' so you won't have to call that function manually anymore.

Can we get the images directory. When creating an .mpackage it doesn't grab the images. You need to zip them up separately and attach them.
Top

The Images directory is in the .mpackage. It gets deployed to <mudlet home dir>/Clickable GUI/Images

The space in the name can be a real bother on *nix systems... to remove it, simply rename the .mpackage file to whatever you'd like the package name to be.
Top

If anyone is using Delrayne's example, I ran into the issue that the jpg files would not show up. The png however load fine. After some tinkering, I made the others work by using an imagine editor to convert the format to png. If it matters, I'm on windows 7. Spent a good hour or more before I saw the pattern of the extensions. Not sure if a bug or a known thing (demonnic did swiftly mention to me that jpg isn't supported) but if anyone has a similar issue happening this may be why.

Thanks for the source, Delrayne, really helping me understand the capability of Vyzor better. Hopefully at some point I can contribute my own GUI to this thread

Yes .jpg isn't supported, but they loaded fine for me. Possibly because I'm on a linux distro so maybe mudlet is just a little more friendly towards them than on a windows version. Also, sorry for the different file types. This is sort of the first real package I've handed out, so some fine tuning on how to do so was and is needed heh.
Top

I think .jpg isn't supported by Qt on Windows because of patent issues there.
Top

Should be using exclusively .png, to be fair.

Not entirely accurate anymore, the ASCII map space is currently occupied by a queue visualizer, and will probably change into a who here / enemy and ally tracker like Draylor has. Afflictions are properly colored now (red for stuff to cure, green for things being ignored), I just spammed some test data in there while I was working on it. The big black box on the bottom right will have skill buttons when I get around to making those, ideally I'd like it to become an accurate representation of keybindings like an MMO skill bar. I've got the Mudlet map partly hidden by placing the graphic over it, and leaving the space where it should draw transparent. This however blocks map interaction so I may end up simply having the controls visible again, or maybe cut up the graphic and place it around the map rather than a full overlay.

Uses Vyzor, and artwork is from opengameart.org.

I mud on a laptop and really miss a mouse, so instead of making everything clickable I went old school. As well as the normal chat and stat windows everyone has, for targeting and using skills/spells I use Geyser boxes and labels. 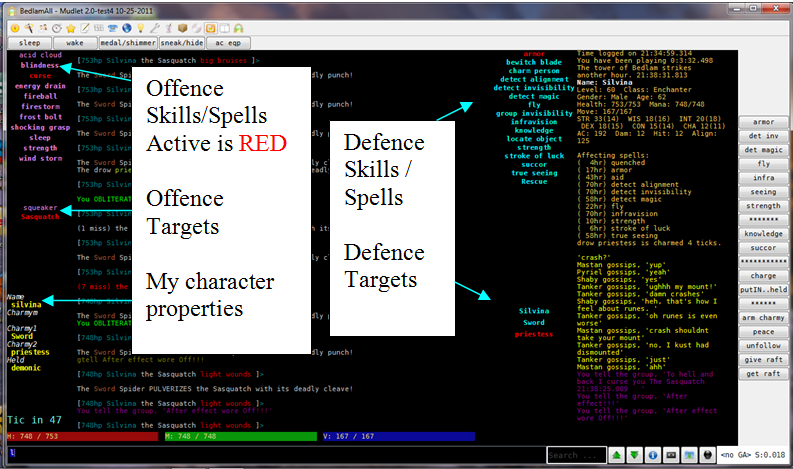 The offence target's update every time I move room, or look a second time in a room just in case a mob enters after me. Whats not shown in the screenshot is that if there are several mobs with the same name they are prefixed 1. 2. 3. etc so I can target a specific mob. I switch selection by using function keys to scroll up/down and a third function key to fire that skill/spell at the selected target. I'm not that fast or accurate on the keyboard so it helps a lot. I've not seen anyone else take this approach so thought i'd share it

I tend to alt a lot bewteen characters, so each ones specific skills etc load on a alias which updates everything via a script, which makes it very fast. This is also very useful for controling charms. I just set the charms to a variable (either via an alias, or for charms I use long term, load it via a script when I load the alt setup) and then can direct the charms via the variables. 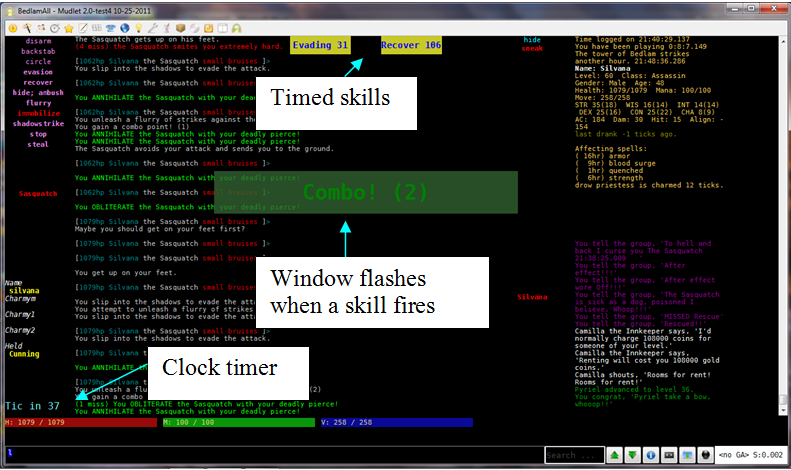 The held Item in my char properties is stored as a variable and updates automatically should it change, which makes it easy to swap out hold items and you always know what your holding.
I have several timers as variables which all run of a central timer of 1 second. This makes it very easy to have a countdown to the game tick, and timed skills etc

Still working on it...