Looks very good, and is an exceptional answer to this problem... Hell, I may even integrate this into Mantis, or something very similar to it. That is, if it's still under the MIT license, where I can take it and use it at my disgression!

Objections? none at all... that's made of awesomesauce.
Top

I was thinking about some generic form of balances. A balance class or something like that.

The system would automaticly create the neccesary timers for the balances.

You'd also have the functions:

I agree that they aren't that simple; I don't think a timer can be a functional way of tracking these sorts of things.

On IRE games at least, it appears there's always a notification when you "regain" the slot (what I'm calling generic-balances), I don't know if that holds for others. Triggers therefore seem to be the only way to reliably track a slot being used and becoming available again-- it breaks down when someone suffers lag, but I don't think a generic system can try to protect you from lag.
Top

That's why you would have the function regainBalance("balanceName") which can simply be triggered on the balance regain message, e.g. "You may drink another potion.". The timer part of the balance is to protect against illusions/things that mess up a certain healing method. It will basicly ensure that IF you haven't received the balance regain message after a certain time period, it will reset the balance, and thus preventing your curing script from locking up. If you don't want automatic balance regaining, you can always set the balance delay to 0. Ideally you want the balance regain delay to be a little longer than the actual balance regain time. You can tailor the balance delay to suit your character race/curing method/any other things that might influence the balance ... These routines would basicly be nothing more than glorified timers, but would save many people from scripting headaches. This is not limited to balances, but anything that induces (or that you want to induce) some kind of delay can be scripted this way. For example you could make a balance called "tempPlant", which would start running whenever you try to eat a plant, and would be reset automaticly after 0.4 seconds. This 'balance' could then be used to prevent spam-eating a plant, if due to any reason you haven't eaten the plant in 0.4 seconds, it will reset the tempPlant balance and try to eat again.

My apologies for using 'balance' instead of 'slot'. I'm just used to the term 'balance'.
Top

What you mentioned is actually pretty great. I need to build balance timers into my system because these stupid goblins keep giving me blackout and my autobasher turns off. >.<
Top

Ramiel wrote a rather nice balance system which I have been using. I forget if his forum name here is Ramiel or Leigh.

I'll post the code here for you, which is not exactly what you want but may give ideas. I've found it to be really solid, though I tweaked it slightly. It is not nearly dynamic enough to be what Crucible needs, but it is still solid and easy to work with. When I wrote a sytem for Lusternia, converting it to Lusternian balances was quite a simple process.

For the writhe balance, I tied my writhe curing into balance and expect system, to stop it from writhing multiple times. I did this because as I was writing the writhe system, it occurred to me that what I was doing was essentially the same as my balance system, and rather than reinventing the wheel, I called "You begin to writhe free of X" the "you have spent writhe balance" message, and the "you have writhed free of x" the "you have regained balance message.

I am mentioning that specifically to show how a decent, dynamic balance system can be useful for more than just the obvious purposes.

The expect system is what deals with things like stupidity or amnesia from causing sent commands to fail. This one uses a timer, which defaults to 1 second but can be different as you see.

The inclusion of aeon as an 'expect' (even though it is not a 'balance' in the balance system) is there to help with my aeon curing. I am specifically mentioning this because the code you're creating has uses other than just balance management, and it is good to keep this in mind.
Top

Something else that occurred to me, which is important, is what you actually want to do once a balance is returned, or defaulted by the expect system. In the script I've posted, I rerun my curing function but that is a mud specific thing, and in fact not even ideal for my mud, since it is only using cure-related balances. If I wanted to integrate my action balances (arms, legs, eq etc) and my attack command queue, I would need to dive back into the code to do so.

Ideally, balBack() and expectCheck() would not do anything specific at all with any of the queues, but instead would just raise an event. (Incidentally, balBack() calls doCuresDbase() by way of flagging affs.newaffs=1, which is checked in my prompt trigger, while expectCheck() calls it directly. Either way, it is stuff that ought to be in event handler functions, rather than directly in the balance and expect system scripts.)

I apologise if the stuff I am saying is already what you're doing. I'm having trouble accessing launchpad from China so until I set up my vpn the best I can do is say what I think is important, and let you ignore it if I'm repeating what you already know 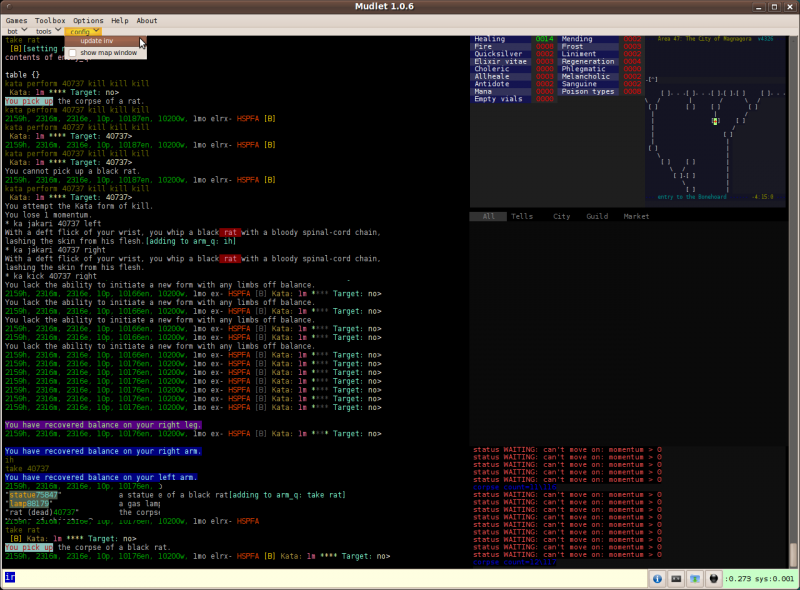 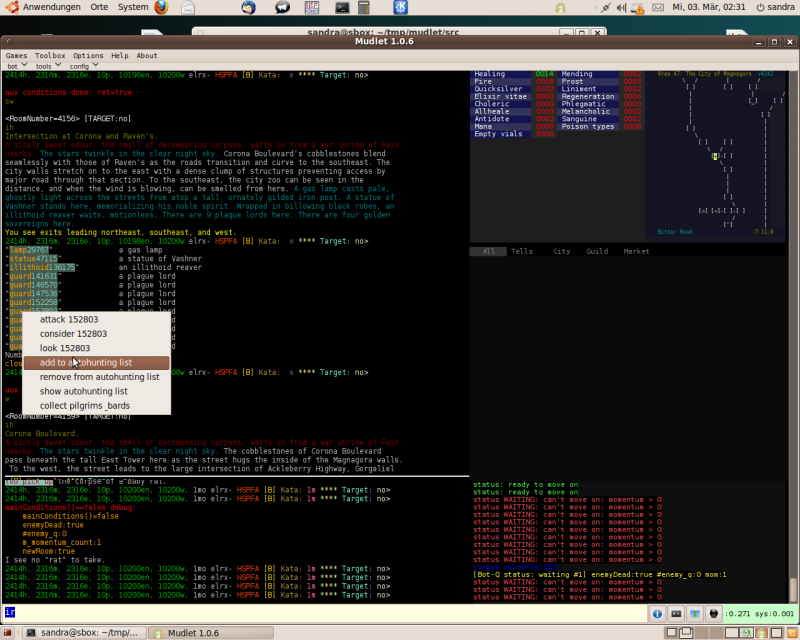