All and any discussion and development of the Mudlet Mapper.
Post Reply
6 posts • Page 1 of 1

Hello
I have no experience of any mud except discworld.atuin.net, and wholly appreciate that my request/idea for an alternative/last resort 'mapper' may be too niche for mudlet to incorporate, but thought i would put the idea up as, if it turned out other muds were similar in certain respects, i think the following could be a very functional way of dealing with harder-to-map muds.

discworld has:
no mxp(/atcp?????) or equivalent support for roomnumber,
many rooms with the same short and/or long description,
a very well drawn set of maps entirely external to the mud (eg: http://daftjunk.com/dw/Bes_Pelargic.gif),
generic movement commands (north/n, south/s, etc.).

If there was
a)
a console in mudlet which you loaded an image, where say right click created a room in a map db, and tied it to the (x,y) you clicked on, and say left click drag between rooms created exits between them [perhaps 'guessing' what types of exits they were based on the slope of the line].
(edit: i guess you wouldnt really need to have an image loaded at all, as in drawing the rooms/exits you are basically creating all info you would need to draw a map anyway?
could you just do it by opening a console and entering the commands you would use to move around the area you wanted to draw to save cleeecking/ignore all output and simply make a map from the user's movements while in the mud?
isn't this the whole idea of a non db based map amnyway

b)
a console that loaded a select portion of the main map image, centered around some (x,y), as determined by [user-set position] + [movements since set]

one user could map discworld's cities [would not work so well for terrains hehe] with maybe 2000 clicks of a mouse and some temporary triggers for portals.

would it be an efficient solution at all?

thanks for all the work on mudlet
Top

I'm not sure that making a custom tailored solution for one MUD that still requires a lot of effort from the user to work would be worth it.
Top

ofc i didnt mean to ask for that, i meant that if it turns out that many muds are hard to map, could this be a solution?
Top

Using images of hand drawn maps has been in the back of my head for a long time. Technically, it's easy if the quality of the map is good. However, this will rarely be the case unless you take the raw ascii map data directly from the MUD.

Any suggestions in this area are very welcome. However, you need to go much more into detail as this is really where all the problems start. For example, it's relatively simple to use ASCII based grid maps from LP type of MUDs and make them artistically nicer. This would still keep the exact x,y,z mapping in place. With other non grid based maps such as IRE maps, this wouldn't be possible this easily.

In any case, the mapper will make a clear distinction between grid and non grid based maps anyways as these are the 2 most common map types and both require very different technical treatment. Consequently, we'll most likely offer hand drawn map images for grid maps, but not for room based maps.
Top

This is still a work in progress but does show what is possible right now.... (without gmcp/actp, no IRE,.......)
This is many thousands of rooms and took me a little over an hour to map.(captured from muds ASCII map and the map shown in grid mode) 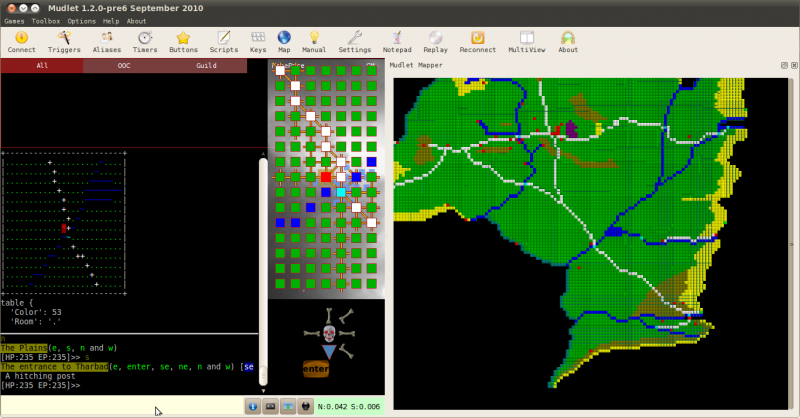 From the muds ASCII map 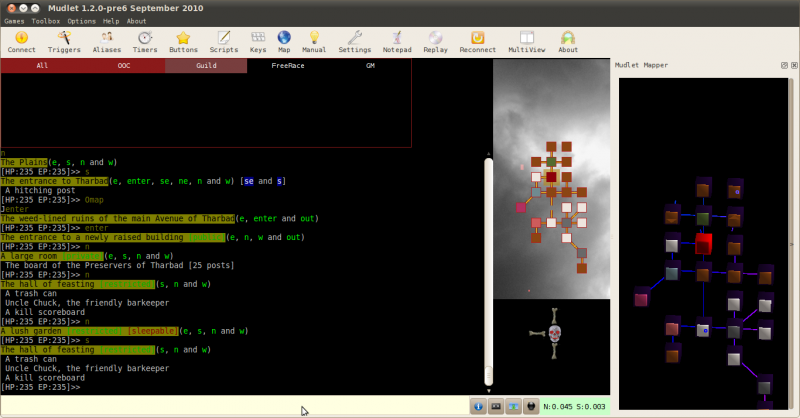 This kind of thing will just get easier....
(only the maps on the far right are mudlet's the other is a map made with Lua scripting and labels.)
Omit
Top